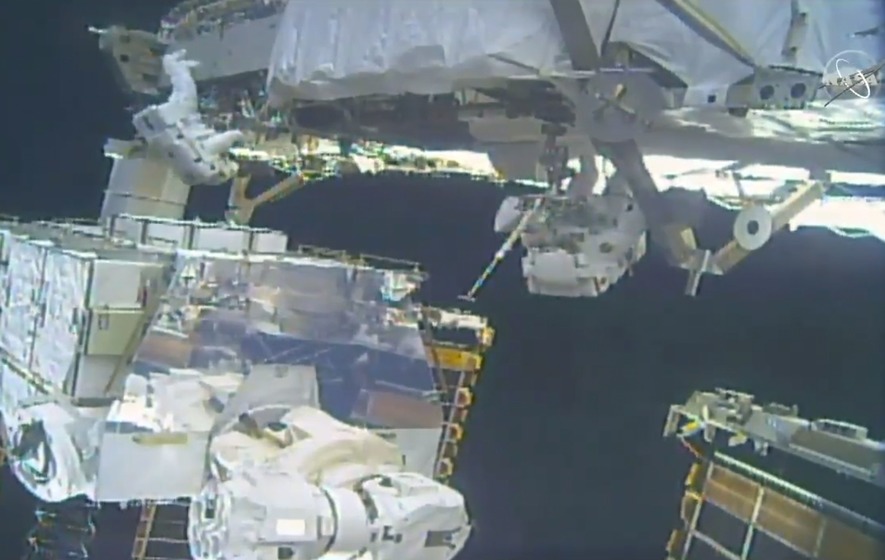 Nasa’s Jessica Meir and Christina Koch completed the work in their third joint sortie from the craft.

A pair of spacewalking astronauts have wrapped up battery improvements outside the International Space Station, completing a job begun last autumn.

Nasa’s Jessica Meir and Christina Koch installed the last new battery in a set of six launched to the orbiting lab in September. They also removed two old batteries in their second spacewalk in under a week to upgrade the station’s solar power grid.

This marked the women’s third spacewalk together. They conducted the world’s first all-female spacewalk last October, replacing a failed charging device that bumped the battery replacements into this year.

The women had just completed the battery work when Ms Koch inadvertently deployed the hand controller on her emergency jet pack, called a Safer. Ms Meir hurried over to get the controller back in its proper place, prompting Ms Koch to call her “my hero”.

Mission Control cautioned that, given the current set-up, “we would not count on Christina’s Safer” in an emergency. Nasa’s spacewalking astronauts always wear small Safer jet packs in case they become untethered from the station and float away.

During last Wednesday’s spacewalk, Ms Koch’s helmet lights and camera came loose. She later found a faulty latch in the helmet assembly and replaced it before floating out on Monday.

She has been aboard the space station for more than 10 months, the longest single spaceflight by a woman. She returns to Earth in just over two weeks.

Nasa has been gradually replacing the space station’s 48 ageing, original-style nickel-hydrogen batteries with new and more powerful lithium-ion batteries. Only half as many of the new batteries are needed. So far, 18 have been installed over the past three years and 36 old ones removed.

These oversized, boxy batteries keep all the space station’s systems running when the outpost is on the night side of Earth, drawing power from the sprawling solar wings. They are not easy to handle: Each is about a yard tall and wide, with a mass of about 400lb.

In all, five spacewalks were needed to complete the battery work this time around. Monitoring the action from inside, Nasa astronaut Andrew Morgan congratulated his “astro-sisters” for a mission accomplished.

As Monday’s seven-hour spacewalk drew to a close, Ms Meir and Ms Koch paid tribute to US civil rights leader Martin Luther King Jr on the holiday marking his birth.

Ms Koch noted how she and Ms Meir often say how much they owe the pioneering female astronauts who came before them and everyone else working for civil rights and inclusion.

“That’s why it’s so meaningful for us today to be out here, on the day we honour Martin Luther King Jr, who paved the way not only for us, but so many that have a dream,” Ms Koch said.

It was their last spacewalk together, at least during this mission.

Mr Morgan and Italian astronaut Luca Parmitano will venture outside on Saturday to complete repairs to a cosmic ray detector. The science instrument’s cooling system had to be replaced, an intricate job requiring four spacewalks